I designed this chair during a collaboration with David van der Veldt D&A Craft For an exhibition at Boijmans Museum in Rotterdam David and I band together to form D&A Craft to show our aim to combine new technologies with traditional crafts.

The concept is based on local production and micro manufacturing/industry. The minimal effort for the furniture is a simple 3-axis cnc-mill working different kinds of material. Also plastics or metal are feasible for the design. A parametric construction can change the design for different thicknesses of the material.

I am also designing molded seating and backrest versions. Goal is a form of licensed local production and enabling the expansion of product variety. Also other designers and material developers will be invited to co-develop the furniture.

The chair only needs about half a square meter of material. David designed the table by always using a given whole plate to minimize waste. 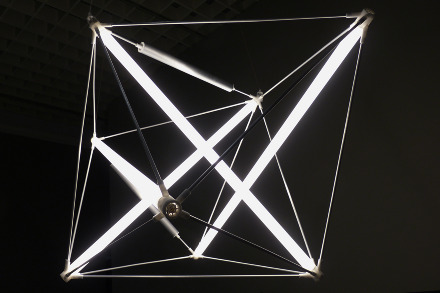 The structure bases on Buckminster Fuller’s formed up principles of “tensional integrity”. This enables me to create diverse forms, shapes and applications while using little raw materials and supplies.

The structure is build up on simple semi-manufactured materials connected by complex 3D printed modules. This procedure makes it possible to use the otherwise expensive 3d printing technique as a real manufacturing method because one part no matter how complex it is will be able to compeed with the otherwise necessary industrial production.

A first prototype has been tested to create a modular system for ceiling lights that includes “acoustic panels” to downsize distracting and unpleasant reverberation. 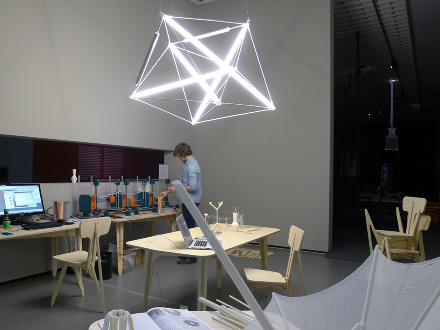 Tensa with "acoustic panels" made of micro-perforated polycarbonate foil.

Redesigning the umbrella by recognizing every element of the design as a parameter that when changed has an effect on another or other.

Through this process I am able to develop a path for a more consistent design and ultimately a better product and product variety.

Designing parametrically in any stage of a design makes change, adaptation and production easier and allows more transparency in products.

The whole production process of part assembly is cut down to a minimum through CNC-cutting and CNC-ben-
ding simple extruded profiles.
3D printing the whole structure in one piece cuts its production effort down to one machine.

The cover can be CNC-knitted in one piece. No sewing is required.

Jonathan Ive, chief designer of Apple Computers said this in the promotional video for the ipad. The ipad itself isn’t that important here. Its a technical device more or less potent depending on the way you look at it. I remember this statement because I was quite intrigued by it. It evoked a duality of affirmation and aversion in me.
On one hand it is a true sentence because it outlines the peoples’ ardor for the fantastic and the strong will to get hold of it; on the other hand this sentence negates the state of our pronounced society to favor rationality over magic.
What Ive says reminded me on what individuals of our globalized society are facing: A form of distance from the physicality of objects and the convergency towards more elusive variables like beliefs how an object appears to work or where it appears to come from. Whether commodities or comestibles, this paradoxical circumstance comprises most everyday products. People are sold an image of something, an illusion that accentuates the qualities of products. I see these deceiving elements in marketing and consequential in their way of production as absurd. I am confronted with a lack of content in consumption, while I am in a supermarket to buy food, in a warehouse to get a needed commodity or while I am searching the internet for a technical device. My ideals, which I consider a synthesis of me being a conscientious person, following common sense and reasonable calculation, are triggering a voice inside of me, which keeps on saying: “This is not how it is supposed to be. This is absurd!”.
As a person I like to make people aware of this point of view; As a designer, I want to contribute to make a change to the current production circumstances of commodities.
My script is devoted to the future of society, how it per-
ceives itself, how it wants to perceive itself and how it is able to improve and to change itself. The way a society relates to consumption is an important element in this equation and forms the basis of how products should be created, produced and distributed. 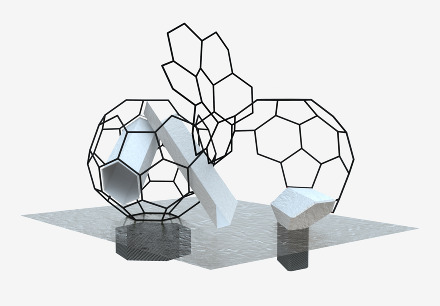 This element is a part of a project the DesignLAB de-
partment of the Gerrit Rietveld Academie in Amsterdam has set up. On request of heritage organisation Casa Memoire and together with local artisans the design was realized in three weeks time.

My intention with this playing element was to establish
a relation between the moroccan ornamental styles and
a western playground element.
The child can explore the structure and perceives its fig-
ure from many perspectives. Architect Aldo van Eyck gave a starting point here and led me ally my ideas with some of the aspects in Structuralism.
The playing element is formed as a world on its own. The parents can sit in the structure beside the playing children thus are able to be part of their experience. The project was assisted by Jurrijn Huffenreuter. 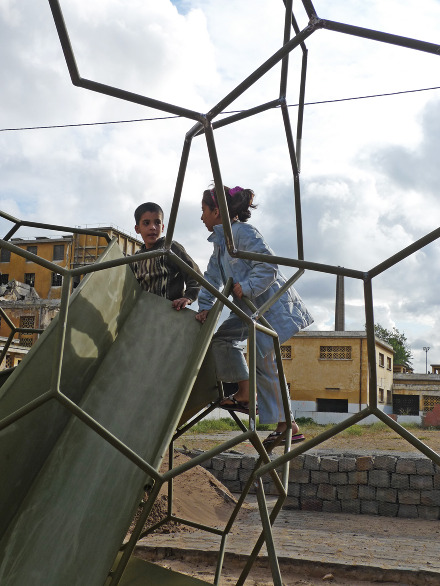 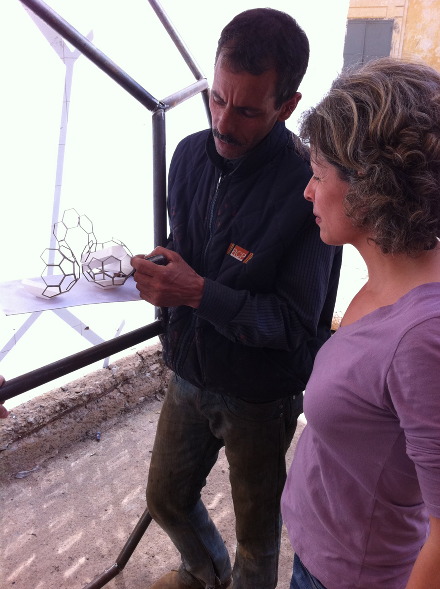 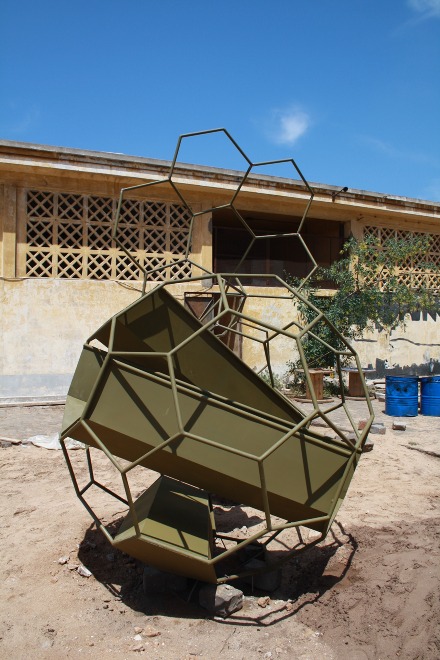 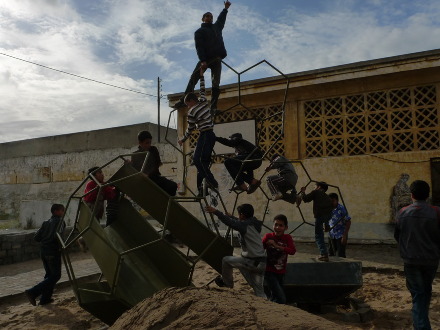 Hands-On bionic design of the manipulation and locomotor system of a scientific submersible vehicle. Designed by trying to use evolutionary processes in developing forms and funktions and by transferring attributes of organic life into technological objects.
Not one-to-one but by „asking“ nature what it would
do having technology instead of organic matter at its disposal. 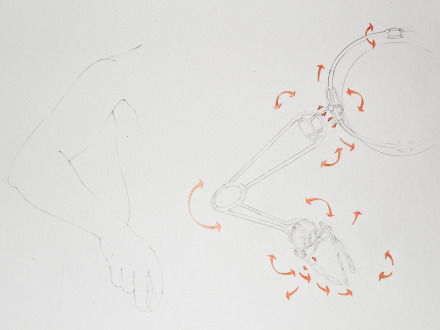 Translation of the human locomotor system of a human shoulder, arm and hand -

Housing the robotic arm in submersible vessel that -

can fold in to improve hydro-dynamics 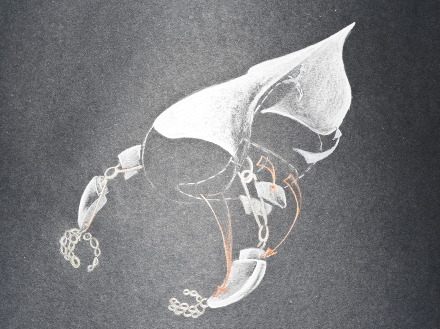 Its character is carried further into the packaging: Also made from a single piece it uses the same curvature only by 3D folding the initial sheet material.

This shelf and table are independent from a possibly dipped ground. The construction holds “itself” together by keying elements.
The design focuses on realizing a heterogeneity of the characteristic structures and the sub-structures. In this example the table’s design emphasizes its peculiarity:
a horizontal surface in a specific height. The table’s columnar stands, the sub-structure is holding everything in place.